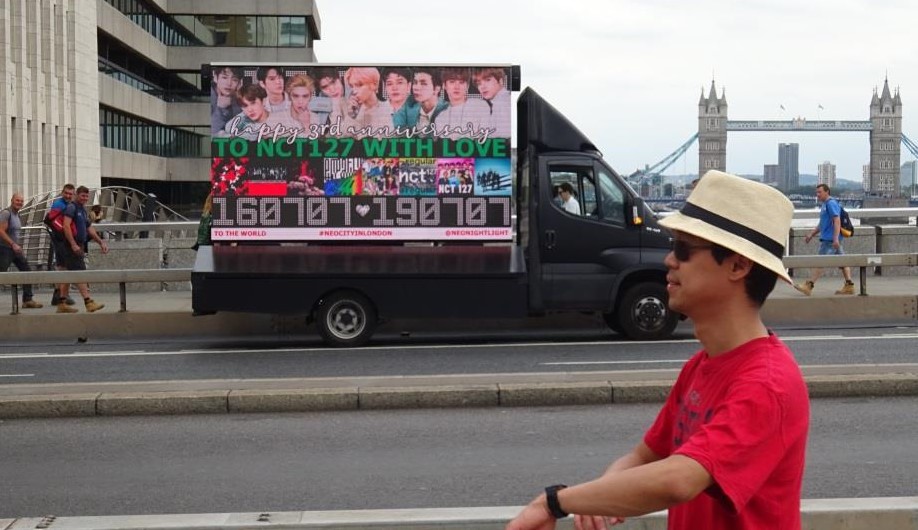 Googling ‘mobile billboards’ a fan of South Korean boy band NCT 127 landed on the website belonging to Newcastle upon Tyne based #GorillaMedia. They then contacted the out of home advertising contractors to supply a digital display advertising van in Central London. The message was to congratulate the band on their 3rd anniversary and in selling out their show at the SSE Wembley Arena.

The digital ad van cruised the tourist hotspots around the capital over the weekend of 6th & 7th July, playing video extracts of the band’s promotional video performances interspersed with good luck messages displayed on its mobile LED video screens.

The band’s name is derived from the acronym for ‘Neo Culture Technology’ a concept where there are unlimited members in the group. And the number 127 represents the longitudinal coordinate of the South Korean capital Seoul.

What made the operation really unusual was that it was commissioned and paid for by an individual fan of the band based in British Columbia, Canada. Although Gorilla Media have promoted many music events on behalf of promoters and sponsors across the UK, this is the first time a fan has shown their appreciation and affection in such an impressive way.

Gorilla Media, operation director David Roberts said: “As the enquiry from Vancouver came through on Canada Day, we initially thought someone had been celebrating the holiday too much. However, when the email confirmation landed along with the transfer of the video files and Canadian dollars, we realised this was a genuine fan and so the digital ad van hit London”.

From Vancouver to Seoul via London with love!