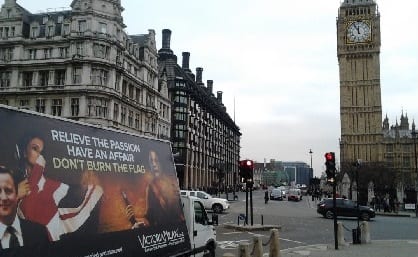 VictoriaMilan is a dating agency with a difference; aimed at married and connected individuals they operate on the premise that it is sometimes better to have an affair than separate. All of the ad van campaigns to date have featured prominent European personalities, politicians and even royalty, some who have taken legal injunctions to stop these high-profile mobile billboard campaigns.

The week-long campaign features the Scottish independence theme to promote the controversial VictoriaMilan message. Featuring First Minister Alec Salmond in a Braveheart guise and Prime Minister David Cameron it carries the headline ‘have an affair, don’t burn the flag’. And it is hoped that as in other European cities, the mobile poster campaign will be picked-up extensively by UK media featuring the very visible Ad Van banner in their coverage.

Advertising guru David Ogilvy once said ‘your poster should be a visual scandal’ and the VictoriaMilan ad van campaign certainly gets the tongues wagging.